Wellboat Reisa First to use the NES Raven Bridge System

Havyard delivered the wellboat 'Reisa' to Norsk Fisketransport this week, significant in that Reisa is the first vessel in the world to use the bridge system Raven INS developed by Norwegian Electric Systems.

When the Raven Integrated Navigation System (INS) was type-approved by DNV GL, it was granted a world-first type approval for a bridge solution where an integrated computer system was developed for the bridge instead of combining different pieces of software. The integrated bridge is designed to allow for simpler and more flexible use and provides improved operational reliability and a sound platform for the future digital and green revolution at sea.

To help put it in perspective, Sales & BID Manager Smart Control Svein Ove Farstad compares this to how people used to have a calculator, a photo album and a phone book, while all of these functions are now combined in their smartphone.

"Raven INS integrates the different programs for charts, route planning, radar, autopilot, trackpilot etc. into a comprehensive program and a bridge solution with all software and hardware, as well as an integrated operator's seat. This makes the bridge easier to use and improves operational reliability."

In addition, Raven INS allows users to adapt the monitors and screen layout as needed.

"The bridge on board Reisa has been tailored for the wellboat and to the specific operations the boat will carry out. You can also simply switch between different operations at the touch of a button, whether you are on a transport leg, lying stationary beside a salmon cage or approaching port," said Farstad, emphasizing that the computer and network-based solution improves safety. 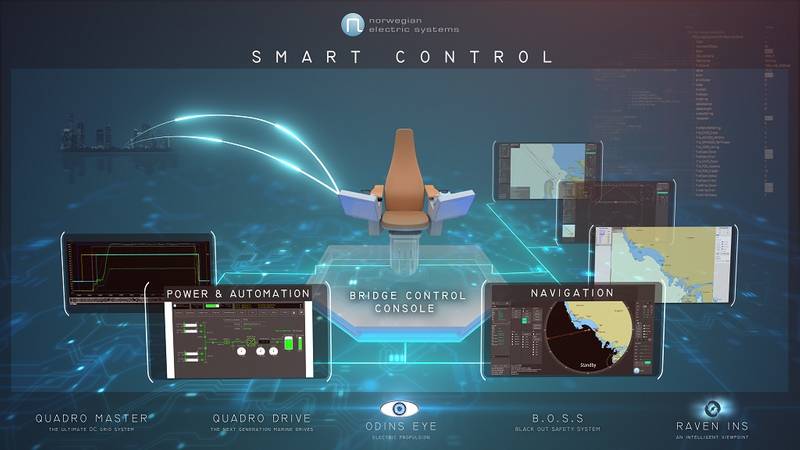 When the Raven Integrated Navigation System (INS) was type-approved by DNV GL, it was granted the world's first type approval for a bridge solution where an integrated computer system was developed for the bridge instead of combining different pieces of software. The bridge provides a complete and fully integrated navigation system with user-friendly monitors, seat, integrated and uniform software and hardware. Photo: NES

As computer and digitalization technology evolves rapidly, a real problem in all sectors is the matter of premature obsolescence. According to NES, the Raven INS ensures adaptability to future requirements and needs, as the system was built ready for new functions to be added.

"As additional needs become apparent and the technology develops, more functions can be added. They could include solutions for engine alarm monitoring, thruster control and dynamic positioning, or smaller systems such as navigation light controls," said Farstad. In addition, the network solution also means that Raven INS is ready to interact with shore on data capture and remote monitoring, essential as maritime moves in step toward autonomy.